The Mingora Bench (MB) of the Peshawar High Court (PHC), also called Dar-ul-Qaza, a creation of the 2010 Eighteen Constitutional Amendment, Act, it was formally inaugurated on 10 May 2011. The goal, as enunciated in article 37 (d) of the 1973 Constitution, was to provide inexpensive and expeditious justice to the people of Malakand Division. The protection and promotion of fundamental human rights, including the right to access to justice, is part of that goal, which constitutes both perfect and imperfect obligations of the State, as dictated by article 37 (d).

Fulfilling the long-standing demand of the people of Malakand division, Peshawar High Court Chief Justice Ejaz Afzal Khan inaugurated the Darul Qaza at the PHC's Mingora circuit bench on 10 May 2011. 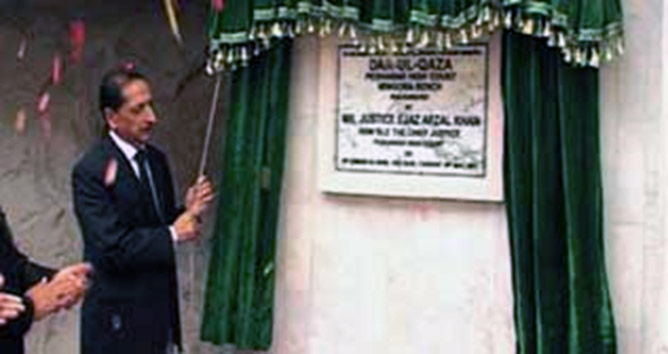 Chief Justice Peshawar High Court inaugurated the Darul Qaza on 10 May 2011. Speaking on the occasion, the chief justice emphasized the role of the society in general and that of the bar in particular at all levels for a just, equitable and balanced society to be built under the rule of law, which was the most cherished and cardinal principle enshrined in the Holy Quran. He stressed upon all the stakeholders to do their best to ensure inexpensive and speedy dispensation of justice to the people.

Khwaja Muhammad Khan Ghara, President of the Peshawar High Court Bar Association, appreciated the efforts of the Peshawar High Court chief justice for making the Darul Qaza functional and assured full support of the bar to the bench for the cause of justice. Asghar Ali, president of the District Bar Association Swat, on behalf of all the district and sub-divisional bar associations in Malakand division welcomed the chief justice and thanked his lordship for the establishment of Darul Qaza. He said it was the longstanding desire of the bar as well as people of the area. The first single bench of the Mingora bench, Darul Qaza was presided over by the chief justice, who heard 19 motions and four notice cases. The office of the additional registrar has already been established with 26 members of staff.

So far 125 cases have directly been instituted in Darul Qaza whereas about 3000 cases of Malakand would sent from Peshawar for their fixation and further proceedings accordingly. Earlier, the chief justice was given a warm welcome by the bar and all others present on the occasion along with a guard of honour presented by the Malakand police. The inauguration ceremony was attended by the commissioner, DCO, DIG and other high-ranking local and provincial government officers. The Darul Qaza, an appellate bench of the Peshawar High Court (PHC), has formally started the hearing of cases in Swat. Addressing the ceremony, the PHC CJ said that it should be judges’ prime responsibility to dispense justice to people at every cost. He said that the locals demanded to establish a circuit bench of the high court in Swat and the promise has been fulfilled today. Now, the people of Swat would not go to Peshawar to follow their cases.